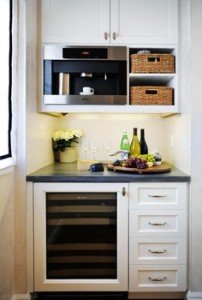 A small room off the kitchen hidden away from guests to prepare meals is a common request to building designers while a separate computer room, TV room or home cinema has dropped off the list.

He recently took the 2013 Queensland Building Design Awards for the best residential alterations and additions in the under $150,000 and more than $600,000 categories.

“If Santa Claus could bring something it would be a butler’s pantry,” he said. “The butler’s pantry has its own sink, dedicated bench space for preparation work, a microwave and other appliances.”

Mr Reitsma said homeowners are a bit more “relaxed” about the walk-in pantry and are happy to have pull-out cupboards and drawers instead.

And in his experience media rooms are on the way out.

“Occasionally we will get a client that has an impressive project and they will throw one in that but that is more the exception than the rule.”

He said the key to a successful renovation is to not just follow the latest fads and fashions.

“You have to be careful that what is being done today doesn’t become tomorrow’s overused item that the next generation wants to pull out,” he said.

“Look at the bigger picture rather than the here and now.”

Outdoor kitchens are still at the top of many lists although Mr Reitsma said rather than spend thousands it is possible to create an outdoor kitchen with just a good-quality freestanding barbecue and bench space.

Written by Michelle Collins for the HeraldSun.com.au

A BLOG (also called a weblog or web log) is a website consisting of entries (also called posts) appearing in reverse chronological order with the most recent entry appearing first.

I have been writing blogs for several years and find it fun to share my knowledge and opinions on design with you.

Please feel free to contact me if you have any questions regarding design for any remodel project in your home. Send me an email and I will do my best to answer any questions you might have: