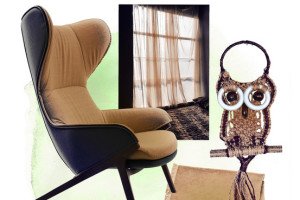 Illustration by gluekit for The Wall Street Journal

1. Macramé and fiber-art wall hangings: “It’s sculpture for your wall that adds texture and replaces wallpaper or fine art you can’t afford,” said Ms. Burnham. “And we haven’t seen it since the 1970s. I think it’s time.” Early adopters include the Ace Hotel chain and architect Barbara Bestor.

2. Window sheers: The popularity of heavy drapes is drooping. “Everyone wants greater transparency and more light,” observed New York designer Celerie Kemble. And “sheers are no longer granny-ish and polyester,” said Los Angeles designer Kim Alexandriuk. “The new ones in linen and wool look rich.” For her part, Ms. Showers is partial to “limousine cloth, a sheer wool voile,” while Ms. Burnham dresses up sheer panels with inverted box pleats “for a more tailored, masculine look.”

3. Corduroy upholstery: “It’s the casual alternative to velvet and the preppy version of chenille,” said Ms. Burnham, whose library sofa is olive-green corduroy. Mr. Harte, who used Etro’s “hip and vibrant” purple corduroy on a gold-leafed bergère, is also a fan: “It looks really cool on formal chairs.” The wider the wale, the gutsier the statement.

4. Venetian marbled-paper prints: Found on the end papers of old books, these intricately swoopy patterns evoke “the romanticism of a bygone, pre-digital era,” said Mr. Wood. Mr. Bullard noted that the prints are seeing a renaissance on “everything from the chicest of wallpaper to finely silk-screened linens and gold-leafed porcelain.”

5. Deco hues: Color has been nudging gray and greige out of the picture, but, for many decorators, bright primary shades can still feel uncouth. “My favorite palette is anything muted and Deco-inspired: rose quartz, amethyst, topaz, olive, whiskey and raisin,” said Los Angeles designer Michael Berman. “Colors that appear to be filtered through smoke and sunlight.” One exception: Several designers expressed a creeping fondness for hits of acid yellow, especially to jolt an otherwise mellow color scheme.

9. Books reduced to décor: “It’s a statement about not reading,” said San Francisco designer Scot Meacham Wood of books that are dust-jacketed in matching colors, stacked into precious tabletop tableaux or—as one high-profile decorator actually did in 2013—arrayed on shelves with their spines to the wall. “It’s an affectation,” said Chicago designer Alessandra Branca.

10 The Belgian look: Devolving into a catalog cliché, the mix of freshly manufactured “antiques” with the linen upholstery and neutral tones so beloved by Belgian tastemakers like Axel Vervoordt “has influenced even our Main Street, U.S.A. vendors,” said Mr. Bullard. “You can’t do a whole room like that without it looking like a hotel lobby,” added Dallas designer Jan Showers.

Several years ago I had a radio show on KKNT, 960 am, aired in Phoenix on Sunday afternoons.   We had fun, we had guests, and unfortunately, we came to an end! I always thought of bringing it back, and podcasting seemed to be the obvious venue.

If you are remodeling, building new or just want to listen for the heck of it, you definitely will enjoy our informative and fun conversations on my podcasts.

You can subscribe to the podcasts under the player

To listen from your phone, you must get the android app or the iPhone app.

Don't hesitate to email me anytime about anything!