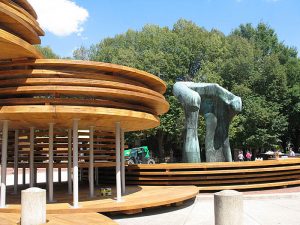 Why are many people are drawn to the Mid-Century Modern design?  It’s hard to describe what this term actually refers to, but with the birth of Mad Men it has become a popular look from the 50’s.  Althought the term Mid-Century Modern can refer to architecture, furniture, and graphic design from the middle of the 20th century (roughly 1933 to 1965, though some would argue the period is specifically limited to 1947 to 1957), many Babyboomers equate this look to their youth.

I had the opportunity to tour the town of Columbus, Indiana a few years ago, thanks to Monogram.  The whole town is one huge Mid-Century Modern museum showing the works of famous architects like Eero Saarinen and his son, Eliel Saarinen, Robert Venturi, J Irwin Miller, Harry Weese, and IM Pei, to name a few from that era. If you are interested in the architecture of Columbus, please check out this site.

The Miller House and Garden, also known as Miller House, is a Mid-Century modern home designed by Eero Saarinen and located in Columbus, Indiana. The residence, commissioned by American industrialist, philanthropist, and architecture patron J. Irwin Miller and his wife Xenia Simons Miller in 1953, in my opinion is timeless.  Taking pictures in the house is forbidden, but what better way to share than by using this video, which I hope you view and then comment on.

A BLOG (also called a weblog or web log) is a website consisting of entries (also called posts) appearing in reverse chronological order with the most recent entry appearing first.

I have been writing blogs for several years and find it fun to share my knowledge and opinions on design with you.

Please feel free to contact me if you have any questions regarding design for any remodel project in your home. Send me an email and I will do my best to answer any questions you might have: